On October 9, the government proposed the new Canada Emergency Rent Subsidy to provide direct relief to businesses, non-profits, and charities that continue to be economically impacted by the COVID-19 pandemic. The new rent subsidy would be available retroactive to September 27, 2020, until June 2021.

The government is providing the proposed details for the first 12 weeks of the program, until December 19, 2020. The proposed program would, in many ways, mirror the successful Canada Emergency Wage Subsidy, providing a simple, easy-to-understand program for affected qualifying organizations. The new rent subsidy would provide benefits directly to qualifying renters and property owners, without requiring the participation of landlords.

This backgrounder provides information for organizations that have experienced a revenue decline and may qualify for the Canada Emergency Rent Subsidy. If your organization has been subject to a public health order issued under the laws of Canada, a province or territory (including orders made by a municipality or regional health authority under one of those laws), you may be eligible for additional resources under the new Lockdown Support.

Rent Subsidy for Organizations Impacted by the Crisis 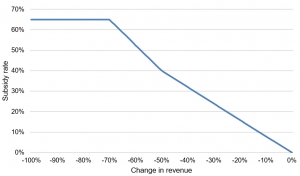 Eligible expenses for a location for a qualifying period would include commercial rent, property taxes (including school taxes and municipal taxes), property insurance, and interest on commercial mortgages (subject to limits) for a qualifying property, less any subleasing revenues. Any sales tax (e.g., GST/HST) component of these costs would not be an eligible expense.

Expenses for each qualifying period would be capped at $75,000 per location and be subject to an overall cap of $300,000 that would be shared among affiliated entities.

Eligibility criteria for the new rent subsidy would generally align with the Canada Emergency Wage Subsidy program. Eligible entities include individuals, taxable corporations and trusts, non-profit organizations and registered charities. Public institutions are generally not eligible for the subsidy. Eligible entities also include the following groups:

In addition, an eligible entity must meet one of the following criteria:

Revenues will be calculated in the same manner as under the Canada Emergency Wage Subsidy program.

Reference Periods for the Drop-in-Revenues Test

Eligibility would generally be determined by the change in an eligible entity’s monthly revenues, year-over-year, for the applicable calendar month.

Alternatively, an entity can choose to calculate its revenue decline by comparing its current reference month revenues with the average of its January and February 2020 revenues.

Once an entity has chosen to use either the general or alternative approach, they must use that approach for each of the three periods. The approach chosen would apply to both the base Canada Emergency Wage Subsidy and the Canada Emergency Rent Subsidy.

An eligible entity would use the greater of its percentage revenue decline for the current qualifying period and that for the previous qualifying period in order to determine its subsidy rate. This would provide certainty to businesses regarding their expected minimum subsidy rate and aligns with the practice under the Canada Emergency Wage Subsidy.

Table 2, below, outlines each qualifying period and the relevant reference period for determining the change in revenue.

All applications must be made on or before 180 days after the end of the qualifying period.

The estimated cost for the first three periods of the rent subsidy program, including the new Lockdown Support for locations significantly affected by public health restrictions, is $2.2 billion in 2020-21.

How Organizations Will Benefit

Sandy owns a kitchen supply store. The store was closed down in the initial stages of the pandemic in March and April, but has since reopened. With new safety precautions in place Sandy now limits the number of customers in her store. In September and October, her revenues are down 25 per cent compared to last year. She paid $5,000 in eligible rent costs during the first period of the rent subsidy. For this period, she will be eligible for a rent subsidy of 20 per cent, or $1,000.

Matt owns a local chain of three casual dining restaurants. With restrictions on dining room capacity, and patio business declining as cooler weather sets in, his revenues were down 40 per cent in September and 60 per cent in October, compared to the same time last year. Matt incurred $30,000 in eligible rent costs in respect of the first period of the rent subsidy. He will be eligible for a rent subsidy at a rate of 52.5 per cent, for a benefit of $15,750.

Under the rent subsidy, MovieCastle Group will be eligible for a base subsidy rate of 65 per cent on a maximum of $300,000 of rent expenses per period. At each location, only the first $75,000 of rent expenses is eligible for the subsidy. MovieCastle Group members decide to divide the maximum $300,000 for the group equally amongst the six members, and each therefore can claim $50,000 in eligible expenses. The total group benefit will be $195,000 (or 65 per cent of $300,000).

This site uses cookies. By continuing to browse the site, you are agreeing to our use of cookies. Learn more.

We may request cookies to be set on your device. We use cookies to let us know when you visit our websites, how you interact with us, to enrich your user experience, and to customize your relationship with our website.

Click on the different category headings to find out more. You can also change some of your preferences. Note that blocking some types of cookies may impact your experience on our websites and the services we are able to offer.

These cookies are strictly necessary to provide you with services available through our website and to use some of its features.

Because these cookies are strictly necessary to deliver the website, refusing them will have impact how our site functions. You always can block or delete cookies by changing your browser settings and force blocking all cookies on this website. But this will always prompt you to accept/refuse cookies when revisiting our site.

We fully respect if you want to refuse cookies but to avoid asking you again and again kindly allow us to store a cookie for that. You are free to opt out any time or opt in for other cookies to get a better experience. If you refuse cookies we will remove all set cookies in our domain.

We provide you with a list of stored cookies on your computer in our domain so you can check what we stored. Due to security reasons we are not able to show or modify cookies from other domains. You can check these in your browser security settings.

We also use different external services like Google Webfonts, Google Maps, and external Video providers. Since these providers may collect personal data like your IP address we allow you to block them here. Please be aware that this might heavily reduce the functionality and appearance of our site. Changes will take effect once you reload the page.